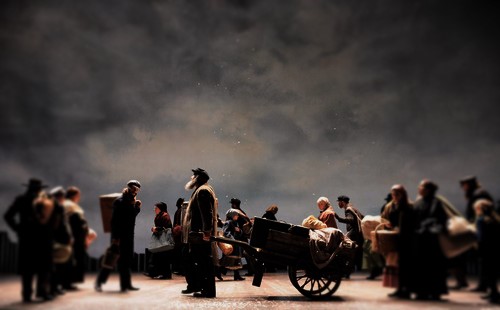 Last night I saw a local community theater production of Fiddler on the Roof.  Interestingly, the show opened a revival production on Broadway last night while I was attending the performance here in Milford.  Fiddler is based on a series of short stories by Sholem Aleichim written in Yiddish at the turn of the 20th century about a Russian Jewish dairy farmer named Tevye and his family, who live in a small village during the end of the Russian empire and rise of the Russian revolution.  The stage and film adaptation of the story make the local Russian officials more lenient and humane whereas they are more cruel and insensitive in short stories.

The plot revolves around the coming of age and marriages of the three oldest of a family’s six daughters.  Tradition competes with modernity as the story illuminates a culture dealing with the advance of  urban life and customs into rural village life including a growing intellectualism, the emerging early stages of gender equity, and the decline of arranged marriages. All of this happens under the shadow of Russian intolerance of the Jewish community and rumor of pogroms and forced relocation.

The show’s now classic songs (“To Life”, “Tradition”, “Matchmaker”, “Sunrise, Sunset”) can sometimes obscure for a casual audience that the story depicts not only discrimination, but a people turned into refugees by an orchestrated campaign of violence and ethnic cleansing.  The story ends with the family scattered and leaving their village for refuge in America.   Which leads to the question, “Would Americans take in Tevye today?”  After all, he’s coming from a communist country and might be a communist. He’s not Christian. He’s a dairy farmer and will take jobs from American dairy farmers.

Donald Trump is publicly calling for all Muslims in America to be registered in a database. He has previously called for the mass roundup and deportation of Mexicans.  And like casual theater goers, many Americans are not troubled by this xenphobia and hate speech as campaign platform.   A presidential candidate is basically calling for the equivalent of pogroms and ethnic cleansing.  We should be terrified, horrified, and ashamed of such statements.

Conservative politics in America has created a culture that seems to be having the same difficulties as the older generation of villagers in Fiddler on the Roof.  We treat intellectualism and knowledge as a threat. “Radical” is the word used over and over by the villagers in Fiddler to describe the revolutionary student who finds his way into the village as a tutor.  The same word and sentiment is applied to anyone who challenges the old, white, male, Christian social order of conservative America.  19th century villagers had trouble understanding choosing one’s own romantic and life partner, not understanding what’s so wrong with arranged marriages. Conservative America has trouble understanding the same things as they cling to “traditional” marriage and dig their heels in against marriage equality becoming the law of the land and ramp up the transphobia.

Contemporary conservatives in America share the dismay of Tevye as he wonders about the role of “The Papa!” diminishing and being replaced with new ways and new ideas, and yet, at the same time, as Tevye’s is driven out of his home by an orchestrated campaign of violence directed at his people because of their religion,  he may not find America as open to receiving him as it was when his story was first written.

Universalist minister in CT. I enjoy thinking about the relationships between spirituality, religion, politics and popular culture. I'm an organic gardener, I play guitar, enjoy chess, and love Bruce Springsteen, U2 and the Boston Red Sox. View all posts by Rev. Tony

This site uses Akismet to reduce spam. Learn how your comment data is processed.

I’m a Gen X Missional Unitarian Universalist Preacher Loving the Hell out of the World in Massachusetts.